You've Been NOT Served 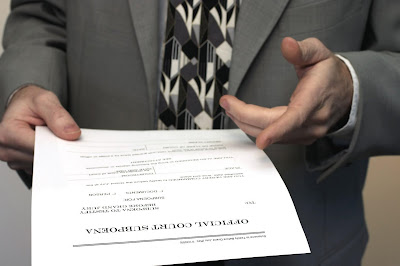 So I'm in the shower this morning, scrubbing my ravishing bod when I hear banging on the door.

Few *pop-in* at our house so I knew something was afoot - especially by the impolite tenor of the knocking.

I eventually got out of the shower, wrapped a towel around my urogenital area and took a peek outside.

There was some large vehicle out there, idling, but I couldn't recognize the man in the driver's seat through the tinted glass.

So I banged on my little stairwell window to get his attention.

He rolled his window down and said:

OldCootDude - Your father called from Haiti. Am I at the right place?

CaptiousNut - Oh, he lives over on [street address].

At that some 'old bag' got out of the passenger side. I slammed the window shut and walked away, deep inside my the bank's abode.

Five minutes later my landlord showed up. He conversed with her for 30 minutes. Then someone tried banging on my door for quite a while. Nobody must have been home.

I stayed out of sight and enjoyed my breakfast - a Long Island everything bagel - in between giggles!

Now either the 'old coot' accidentally spoiled his wife's *surprise* OR he deliberately botched it, knowing that she could get paid twice for an initial miss!

As the only witness, I think his botch was inadvertent. I mean, why start out with a half-baked story about my father calling from *Haiti*....if you were only going to *lay down* 30 seconds later?

I'm pretty sure, but I think that each attempt at *serving* me will cost my landlord additional money.

And I think it's not advisable, or effective, to keep avoiding the notice....but I'll do my best to get the 'old bag' paid for at least three attempts - especially in this Greater Depression economy!
Posted by CaptiousNut at 11:30 AM