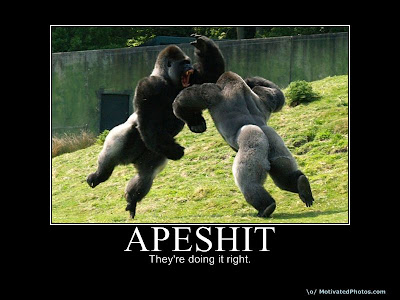 My landlord that is.

Yesterday was the first of the month and he had the gall to come to my house, approach my wife in the backyard, and demand the rent check. She told him we'd give it to him tomorrow (wink!). And he asked that we put it in his mailbox so there'd be *no confrontation with [moi]*.

So today is the second of the month. I get up and spend a few hours shoveling out the driveway which was just blanketed with seven inches or so. He comes barreling in after I'm almost done, gets out of his car, and then right away accuses me of *trying to block his office door* with snow. THAT is how he goes about *avoiding confrontation*. Heck, he didn't even say Happy New Year!

For 2.5 years I've taken care of the entire driveway, shoveling mountains of snow. He's done squat even though we both technically share the driveway. Even worse, he comes in and drives over the snow, packing it down instead of helping clear it off. He's one lazy, entitled POS.

You have to understand, the jerk only came over yesterday (on New Year's Day!) in hopes of getting a rent check. The suspense about whether he'd get one this month or not must of been killing him!

And he only came over AGAIN today to his empty, silent office with the same thought in mind. Because otherwise he's never there anymore.

Now here's the kicker, as I shovel the driveway, I move cars around - like everyone does. In fact, I had an extra car in my driveway because we bought one and were in the process of selling another. And the clunker was just sold late last night. At any minute I was expecting a tow truck to come haul it away. So I pulled it upfront and into the middle of the lot to facilitate the towing.

So after I finish a few hours of work cleaning out the entire driveway, again, which my f-head landlord could just sail right into in his certified pre-repossessed SUV...

He comes back from wherever he just went (McDonald's, dollar-menu most likely) and had to park off to the side of the lot, a whopping 30 feet from where he normally parks - because my about-to-be-towed car was blocking his normal *executive* spot - which, again, I JUST SHOVELED OUT.

Having known this clown for some time now, I knew that he was absolutely pissed at having to suffer in a different parking spot even for an instant. I can't tell you how many times he's banged on the door demanding that some visiting friends of ours needlessly move their minivans over a couple of feet. Ten minutes later, I hear someone banging on my door. Thinking it may be the tow truck driver I put on my wet boots and walk toward it. But realizing that it was the a-hole landlord, I turned around, ignored him, and walked back to my computer.

Now get this....not fifteen minutes later, the cops show up at my house!

This knucklehead tried to do to me, what I did to him four weeks ago, in terms of involving the authorities. But what was his criminal complaint?

After some time with the clown, a fresh-faced cop knocks on my door. Looking exasperated, he told me I was accused of blocking Moron's *legal spot*; but rolled his eyes and said he was really just there to *keep the peace*. I told him, first of all, there are no designated spots in our lease. Second of all, that car, as if it was any of his business would be momentarily gone via tow truck. And right on cue, the truck showed up.

But y'all have to behold how Moronic my landlord is.

For a broke-a$$ idiot who obviously needs every penny he can get....coming into my driveway, accusing me of burying his office door, harassing my wife the day before, and then calling the police because of some ridiculous notion that I was blocking HIS *legal* parking spot,....that's a most curious way to entice a tenant to pay their rent, isn't it?

Not only have I been a good tenant for 2.5 years, our rent is technically only 1.5 days late. Who the bleep does he think he is, he of $4 million in delinquent mortgage debt and several hundred thousand in credit card loans, to be banging on my door, demanding rent like I'm some serf in his fiefdom?

And let's not forget that he effectively stole my $5,000 *last and security* deposit by not escrowing it.

All we're actaully doing by not paying rent this month is clawing back half or our OWN MONEY.

I do think that I'm probably going to have to file some sort of *harassment charges* against him to keep him at bay. 3.5 instances within the first two days of 2010 is setting a brisk pace. It's almost guaranteed that he'll start calling my wife at work on Monday. I've instructed her to screen him out, and should he sneak by her secretary, to tell him to *stop harassing* us.

Side note - I've seen people (in Philly) literally commit murder after shoveling out a parking spot and having some free-loader swoop in and take it!
Posted by CaptiousNut at 5:10 PM

The image posted is so very fitting.

Nice to see you finally putting up a fight over your money he is stealing.

Now go get a restraining order against him and initiate a civil action.

I'm talking to a lawyer friend tomorrow who, over email, already said I could easily get a restraining order.