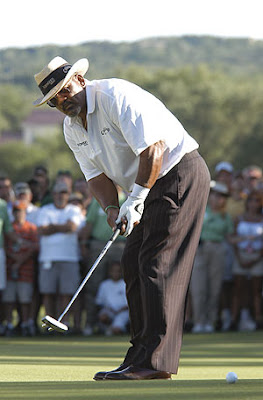 ORLANDO, Fla. -- Professional golfer Jim Thorpe has been sentenced to a year in prison for failing to pay more than $2 million in income taxes.

Thorpe's attorney, Mark Horwitz, said Friday that Thorpe must turn himself in to authorities by April 1. The golfer also was sentenced to two years of supervised release and 200 hours of community service. He must try to repay the taxes while he's on supervised release.

In September, Thorpe pleaded guilty to two counts of failing to pay income taxes and had faced up to two years in prison.

Horwitz said Thorpe "has accepted his punishment and will be getting on with his life."

It sounds like he never paid a nickel in income taxes. Either that or the penalties were included and severe.

Perhaps he's a diehard libertarian? You know, the kind that are fanatical about the unconstitutionality of confiscated wealth.

The poor guy turns 61 next week.

I'm expecting a presidential pardon...
Posted by CaptiousNut at 5:20 PM

Are there any black pro golfers left?