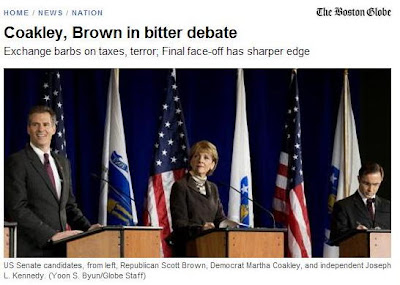 It's all the rage these days, this Senate race for roasting-in-hell Ted Kennedy's empty seat.

On one side there's much *optimism* for this fella Scott Brown - that he's gaining in the polls, that his election would stop Obama's healthcare deform, and that a Democratic loss in this deep-blue state would send shockwaves nationally.

I wouldn't hold my breath.

Yeah, this Martha Coakley is a shrill Moron who's a pathetic excuse for a candidate. Every other word out of her deranged mouth is *Bush* or *Cheney*. And I think she may suffer from a likeness to Nancy Pelosi at the moment.

But this is freakin' Massachusetts, land of the *galactically stupid* - if I can borrow a Tom Cruise line.

This is the State that voted against the convenience of buying wine at supermarkets!

This is the state that RESOUNDINGLY voted against the elimination of their own state income tax!

So don't any of y'all hold your breath, Scott Brown has no chance in this election.

And, BTW, he is nothing special beyond a theoretical *alternative*. He too was among the 70% of the State that voted FOR keeping the income tax in 2008.

I won't be voting as it seems I'm still disenfranchised. They never moved my registration 2.5 years ago from the town of Newton to the South Shore. Whatever. I'd vote for that libertarian guy anyway - even though he's hardly, with his *we make them hate us* position and a rather *lite* platform, my type of libertarian. Nonetheless, only he has the attributes of a genuine *alternative*.

Rightfully, the Republicans ought to disband. Let there only be *one party* versus a Remnant. The Democrats, and hence Big Government, would have a much harder time operating without an institutionalized scapegoat. They really would.

In my radical perspicacious eyes, supporting either organized party, in any way shape or form, is unconscionable no matter what the apparent extenuating circumstance.
Posted by CaptiousNut at 4:51 PM

I agree that Brown has no chance, but that is my way of being surprised if something goes wrong and he actually wins.

Hold your breath ....and your tongue.
Youre beginning to sound like the know-it-all , elite Liberal ,read: Obamacrats.
Your too lazy to get your voting status straightened out...
Bad as the sheeple in Mass you scorn.
Have a nice day
anon MIL

They never moved my registration

Guy...that's up to you to straighten out. Don't try to pin this on some faceless "they". They aren't your mommy. The truth is that you are just too lazy to get it done.

I'm guessing you were equally as lazy when it came to voting against the income tax. Too lazy to vote but plenty willing to put forth the effort to complain after the fact...