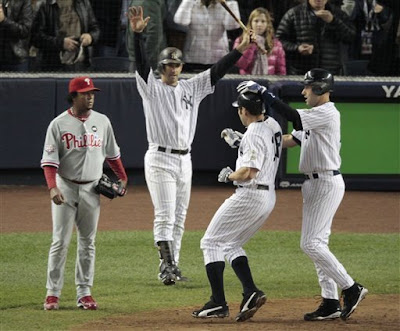 Just before the World Series this year, I said something about the Phillies being in it to my wife...

She turned around and expressed amazement.

We both got a hearty laugh out of her ignorance.

So later that week, she relayed our conversation to one of her superiors at work. I believe he may have been a *Philly guy*. He too expressed his own form of amazement:

SuperiorGuy - Wow. It's really *big* of you....that you could admit that so freely.

So what the heck did that mean?

It meant that this was one of those insecure losers who was always hard at work *managing* what he thought others thought of him. And that's not even taking into the consideration the ridiculous notion that one's intelligence or competence might be gauged by contemporary sports knowledge!

This is one of my wife's biggest, most incessant complaints about *upper management* in her firm. It's just a bunch of clowns playing politics. Nothing is done based upon *what's good for the business*. No, the overriding concerns are who gets credit for successes, who gets blamed for problems, and whose a$$ one should bury their nose in.

There's simply no way that a guy who thinks like that could ever be qualified for his position. I'd stake my life on such an assertion. I've just seen too many of these dissembling Morons.

Here's how it usually goes. My wife gets a new boss, colleague, or underling. I meet them or get a whiff of them in an anecdote such as above. I declare them a full-fledged idiot. And Mrs. C-Nut pushes back; she tells me they aren't; that they are *good* at this or that. I remain unmoved.

Then, invariably, some time later my wife will admit I was right from the get-go.
Posted by CaptiousNut at 9:45 PM

Even if you just blurted out that someone was a moron upon first hearing anything about them, you would only be wrong 15% of the time.

can we agree all humans are morons and get along ?