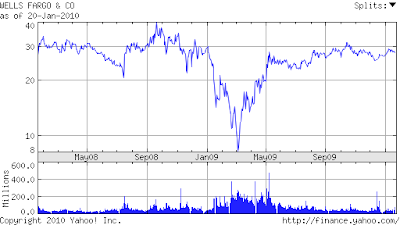 That stock was 7.80 10 months ago, it could easily get slammed again.

If it does, I'll buy stock one-to-one against my puts and turn them into synthetic calls for a ride back up. I have TWO FREAKIN' YEARS.

I knew a guy in on the Philly Stock Exchange who made a boatload, maybe $1 million or so, during the '87 stock market crash.

He had *3/8s puts in Solomon Brothers*. Ironically, maybe a 20 strike as well. I think the stock blew through it something fierce, he similarly turned the puts into *synthetics* and was long for the violent retrace.

Remember, Wells Fargo is bankrupt. A lot can happen in two years: terrorist attacks, dollar crash, Treasury crash, etc. And my risk is a mere 2 pts!

Say WFC drops to $11 where I buy stock, and then retraces to $24 where I sell. In that case, I'll have made 13 dollars on a 2 dollar bet, PLUS I'll still own the original put for more possible flipping! This type of strategy would be called trading *long volatility* or *long gamma*.

Allow my broke-a$$ to dream, will ya?

Side Note - Yesterday I parted with my shares of Stillwater Mining, the palladium play. I sold it for 13.77 a share; I had purchased it at 3.31 last February. Watch it go to 50.00 now!
Posted by CaptiousNut at 1:21 PM