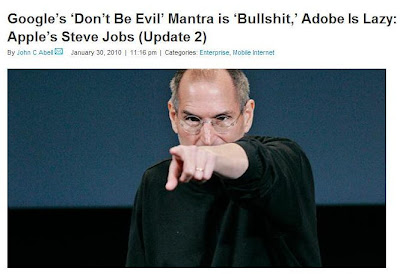 Jobs, characteristically, did not mince words as he spoke to the assembled, according to a person who was there who could not be named because this person is not authorized by Apple to speak with the press.

On Google: We did not enter the search business, Jobs said. They entered the phone business. Make no mistake they want to kill the iPhone. We won’t let them, he says. Someone else asks something on a different topic, but there’s no getting Jobs off this rant. I want to go back to that other question first and say one more thing, he says. This don’t be evil mantra: "It’s bull$hit." Audience roars.

About Adobe: They are lazy, Jobs says. They have all this potential to do interesting things but they just refuse to do it. They don’t do anything with the approaches that Apple is taking, like Carbon. Apple does not support Flash because it is so buggy, he says. Whenever a Mac crashes more often than not it’s because of Flash. No one will be using Flash, he says. The world is moving to HTML5.

Apple certainly is *on top of the world* at the moment; and it's oozing the arrogance usually accorded that station.

But these things are fluid. Some 12-13 years ago I saw Michael Dell speak to a standing-room-only hall at the University of Pennsylvania. At that time, Dell Computer was *on-top-of-the-world*, posting the best stock returns over the entire decade of the 90s.

Most of the audience was wide-eye Wharton MBA students. They were positively drooling over the success of Michael Dell, a man only a couple years older, if that, than most of them.

The speech was awesome and at the end the discussion was opened up to the audience. I'll never forget Michael Dell mocking the viability of Apple Computer and then Sun Microsystems who he said was going "...to go the way of our fruity little friend."

He sounded as arrogant as, well, Steve Jobs today!

Check out the longer term charts and recall that I heard Dell speak in either 1997 or 1998: 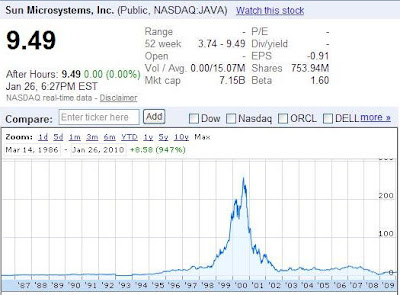 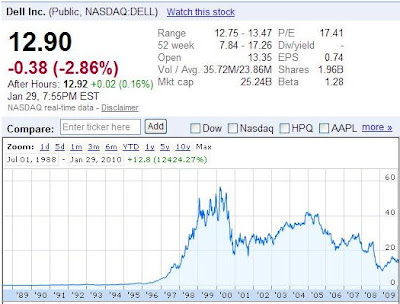 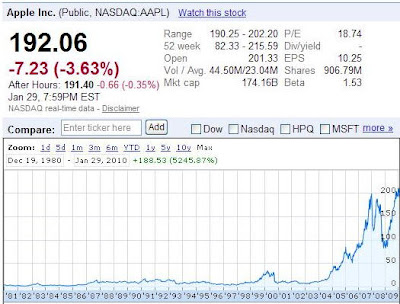 Sun Microsystems did in fact just about go to zero. AND, Apple, in the early part of this decade traded for *cash on its books*. For example, if the company had $1 billion in cash, then it's market value was also $1 billion. In other words, Wall Street valued Apple's computer making business at ZERO less than 10 years ago.

Obviously, since then Apple has risen 20-fold, while Dell stock has gone nowhere.

And today, there's supposedly only one guy out there saying to short Apple!

Me? I believe I've made a little bit of money over the last few years shorting AND buying this stock. But I have no opinion on it at the moment. But you just watch, if the overall market tanks soon as I expect it to, this stock will trade back down below 100 towards its high from four years ago. Then say, for example, the iPad thingy flops, competition erodes the margins of the iPhone, etc. This is how it begins; this is how high flyers morph into decade-long flatliners like Dell Computer - and how a fall cometh after pride (See Proverbs 16:18) for egomaniacs like Steve Jobs.

Michael Dell is kind of quiet these days, at least relative to the others, isn't he?
Posted by CaptiousNut at 4:51 PM

You know I'm sure that I've mentioned this Dell speech before...but after extensive searching, I couldn't find it.