Some Guys Have None Of The Luck 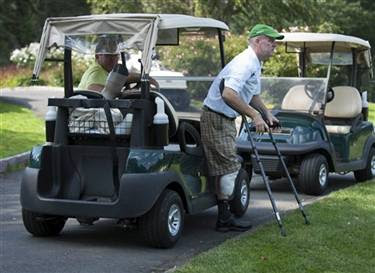 Ken Green, a 51 year-old professional golfer, is a little before my time (as a golfer) so I scarcely know who he is.

But last June he made the news as victim of a horrific car accident. He was driving a camper that veered off-road. Consequently, his girlfriend and brother were killed - and he lost his leg.

Then just the other day I heard that his son committed suicide in a college dorm.

Apparently Ken himself had some psychological problems of his own throughout his life.

How could anyone not feel bad for this poor guy?

And who in their right mind would ever sit next to him at a blackjack table? Or play golf with this unlucky fellow under cumulonimbus skies?

How would you like to see him seated next you on a flight?!
Posted by CaptiousNut at 1:36 PM