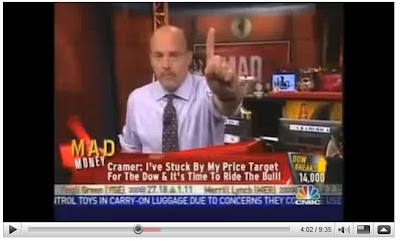 Everyone's piling on him....so I may as well too.

What does a Brown election mean larger than this? Well, first you're going to get a knee-jerk rally in all the so-called penalized stocks -- the HMOs, the drugs, the medical device-makers. I call it "knee-jerk," though, because these stocks have been on fire for months. Look at Cramer fave WellPoint, or United Health. 52 week high. 52 week high. Merck, 52 week high. It's been clear as a bell that the healthcare reform wasn't going to affect most healthcare stocks. That's versus what we thought last year.

More important, though, I think investors who are nervous about the dictatorship of the Pelosi proletariat will feel at ease, and we could have a gigantic rally off a Coakley loss and a Brown win. It will be a signal that a more pro-business, less pro-labor government could be in front of us. Hey, would you say it is more China like perhaps? No, we can never be as capitalist as the Communist Chinese. But how about a little bit less like the old Soviet Union? Yeah, that would be a bit more like it. Pelosi politburo emasculation! Everything from the banks, which are usually in the Democrats' penalty box, or the oils which are despised by this administration for being carbon, could be propelled dramatically higher all of this Tuesday night.

And here's what the market did, the *gigantic rally*: 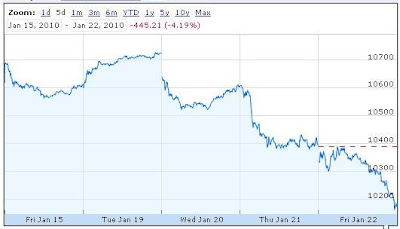 So while Jim Cramer wonders aloud, often, how a guy like Obama who's wrong about everything can get elected...

Others can wonder why, after so many spectacularly wrong calls, why Mad Money still has so many viewers!

Regis Philbin: These are tumultuous times.

Regis Philbin: Is this the time to buy a house?

Jim Cramer: I want to buy not one house. I want to buy 2 houses. I wanna go...I’m going out to California in another month and a half. Prices were up very big there; looking at the Palm Springs area. Prices down 2/3rds. When are we gonna wait until we are down 100%?

Jim Cramer: Well, no. On the west side it’s already moved up. It’s too late. Can you believe it? East side, east side is there, 50% down. East side, I want you to go down with me and we go buy a couple. Go buy a couple!


Future and/or clueless readers note that real estate prices EVERYWHERE have still been declining - drastically in many areas and price-points.

Cramer's too easy to rip; but fun nonetheless.

I weighed in a little bit here on the Scott Brown/Martha Coakley Senate race.

Wall Street - Really Is All Brawn, No Brains

Marginalizing Cramer
Posted by CaptiousNut at 12:16 AM

The reason Cramer is a success is because 1% of his schtick is good, actionable information which puts him 1% ahead of all other talking heads.

I think you overestimate him.

Maybe 0.01%. He's sh*t, not defending him, but I don't know of any other mainstream guy making specific daily calls. Evidently there is a market for that.